The other day I was notified of an update to Android Auto on my phone.  I had seen some online news that a new version would be released that would allow the app to be used without a compatible in dash head unit.  My first thought was “why did this take so long?”, but I quickly got over that and decided to test out the app.  The best feature is that Android Auto automatically turns on if you tell it to when it connects to specified Bluetooth devices. I have two cars and wondered how this would work, but quickly figured out there seems to be no limit as to how many Bluetooth receivers you can pair the software to.  Essentially what happens is that once the app connects to your Bluetooth receiver in the car, it goes into a “dock” mode much like the old Samsung devices could go into a “desktop” mode when docked.  Once the app is up and running the dock interface changes the way that you interact with your phone. 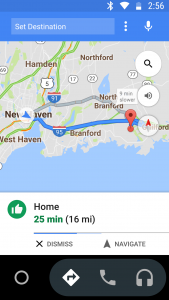 Everything is bigger and there is less stuff.  There are 3 choices of things to do with the device (see image above):  use a map, make a phone call or listen to audio.  These seem pretty straight forward and seem to work well.  I have access to my music streaming and podcasting apps, as well as Google Maps.  An interesting omission is that I can not use Waze for mapping in the Android Auto interface.

I think this is a pretty good update, but the lack of Waze support is a bit troubling to me to make it my permanent car app for now.  On the other hand if they fix this it has me thinking to go back to using a 6 inch phone again on my next update. But overall, I am still left wondering “why did this take so long?”.